Trained by Hall of Famer Bill Mott, the 6-year-old English Channel gelding flourished on the soft going and earned an automatic berth to the Grade 1, $6 million Breeders’ Cup Turf on November 7 at Keeneland Race Course.

Saturday’s blockbuster card offered four graded events, including a last-to-first score by Win Win Win in the Grade 1, $300,000 Forego presented by America’s Best Racing at seven furlongs on the main track for older sprinters; a gate-to-wire effort by Yaupon in the Grade 2, $150,000 Amsterdam at six furlongs for sophomore sprinters; and Bye Bye Melvin started the stakes action with a dramatic nose score over favored Don Juan Kitten in the Grade 3, $100,000 Saranac at one mile on the Mellon turf for 3-year-olds.

Channel Maker, making his third appearance in the Sword Dancer following a runner-up effort in 2018 and a fourth last year, was sent straight to the lead by jockey Manny Franco to mark the opening quarter mile in 25.10, with Marzo racing inside in second position and Corelli in third.

The hard-knocking chestnut maintained a length and a half advantage as he led the field past the finish line for the first time with Marzo and Corelli continuing to chase.

Channel Maker dictated the pace through a mile in 1:42.33 with Corelli making a run up the rail and Aquaphobia, last-out winner of the Grade 1 United Nations at Monmouth Park, following suit as Marzo gave way.

Cross Border, the lukewarm 3-1 mutuel favorite, brought a perfect 5-for-5 record at Saratoga into the Sword Dancer and jockey Jose Ortiz gave the New York-bred his cue to follow Aquaphobia as Channel Maker took the field around the final bend.

Boasting a 5 ½-length advantage at the stretch call, Channel Maker continued to find more, easily covering the soft going with strong, smooth strides. Sadler’s Joy, the 2017 Sword Dancer champ, launched his trademark move from the back of the pack but there was no reeling in a runaway Channel Maker, who strode through the wire a 5 ¾-length winner in a final time of 2:34.86.

Cross Border, purchased as a 2-year-old in training by Robert Tiller, trainer at Woodbine, for $10,000, found his best stride late to complete the exacta by 3 ½-lengths over Aquaphobia, who was four lengths clear of Sadler’s Joy. Rounding out the order of finish were Corelli, Pedro Cara and Marzo. Highland Sky was scratched.

Channel Maker, who captured the 2018 Grade 2 Bowling Green at the Spa, broke through at the top flight in the 2018 Grade 1 Joe Hirsch Turf Classic at Belmont and doubled up in the Grade 1 Man o’ War in May 2019, which was his last winning effort prior to the Sword Dancer.

“He was strong throughout the stretch. He ran a powerful race,” said Mott. “He loves the going. He likes it here. He’s tough when he turns for home on the lead.”

Mott credited Franco for making a winning move early in the race.

“He’s very tricky to ride,” continued Mott. “You could see how level he was coming through the stretch and he was straight as an arrow, but if he gets in crowded, sometimes he’ll get his head up or bear away from horses. So, he’s not an easy horse. He wouldn’t be what every rider wants, but in this particular case, everything went well for him and he finished up straight and strong.”

Last out, when elevated to third in the Grade 2 Bowling Green, Channel Maker was caught behind horses in the stretch run which saw Sadler’s Joy demoted from first to fourth for lugging in late in the lane and Cross Border elevated to first.

Today, Franco said he was intent on dictating his own terms.

“I made the lead and tried to open up to let them know I wanted to go and they let me go. It worked out good for me,” said Franco.

Mott said he will take a wait-and-see approach with regard to the Breeders’ Cup Turf, a race in which the gelding has finished off-the-board in the last two years.

“That water gets very deep. We’ve tried it a couple times and it hasn’t worked out with him,” said Mott. “You get a whole different group of horses. But who knows? There was a year at Keeneland where it was a bottomless ground and if that situation came up, maybe he would benefit from it.”

“We were facing a Grade 1-winner and he got loose today on the soft turf and he liked it. It was hard for everybody to catch up,” said Ortiz. “It was very hard to get going from the half-mile to the three-eighths pole. The second time we passed the three-eighths pole, it was getting very messy, but Aquaphobia made a good move and I tried to follow him. But he struggled, too, and it was hard to make up ground. My horse gave me a little kick, but it was really late passing the three-sixteenths pole when he finally got a good grip on the outside part of the course and gave me a good run. But it wasn’t good enough.” Tracks in the U.S. are in different stages of opening, re-opening or not opening as the final month of 2020 begins. 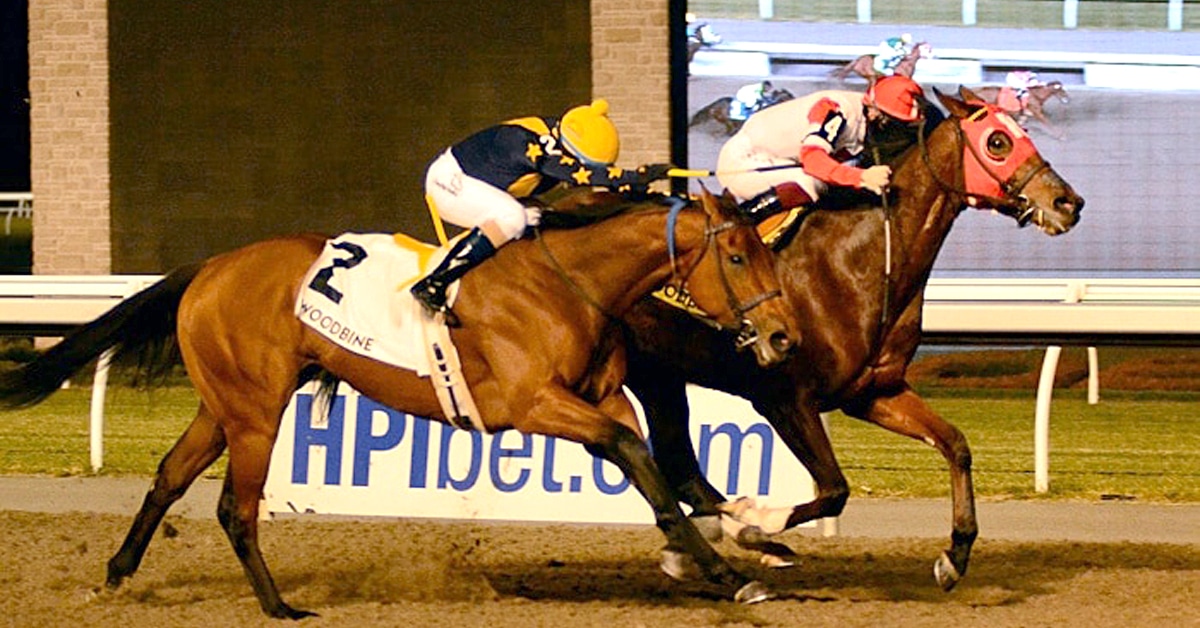 Some Canadian horses and horsepeople have headed south for the winter; some to rest, some to race, or both. Canadian Watch has the news! Son of Scat Daddy was bred by Steve and Kathleen Kemp's Ballycroy Training Centre in Loretto and was also Grade 1 placed. Mistaken Identity: Rescued Mare in Maryland Is Not Canadian Star

A case of a blurry lip tattoo mistakenly had $700,000 earner Saskawea recently rescued by Days End Horse Rescue in Maryland.