Sovereign Awards: Who Are Canada’s Champions of 2020?

Shortened racing seasons, fewer stakes races mean that tabbing this year's Horse of the Year and Sovereign Award champions is a puzzle. 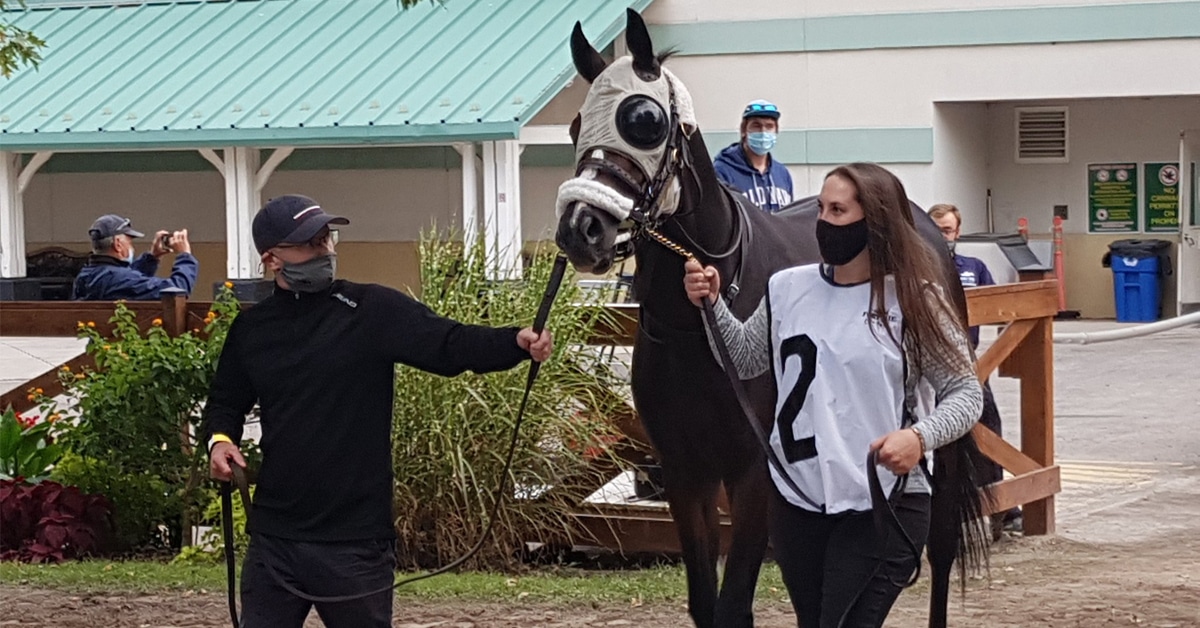 When the ballots of the 46th Sovereign Awards go out in January, voters are going to have a tricky time selecting champions in many of the divisions following  the COVID-19 racing year in Canada.

The racing seasons across the country were shortened, or in Saskatoon’s Marquis Downs’ case, didn’t happen at all. There were about 10 per cent fewer stakes races and 15 per cent fewer stakes winners who made enough starts in Canada to qualify for a Sovereign Award. Two-year-olds must have made two starts during the racing year and older horses, three starts. One of those, STARSHIP JUBILEE, the 2019 Horse of the Year in Canada, won the Grade 1 Woodbine Mile and three American graded stakes races in a career season at the age of 7, but with just that single race in Canada is not eligible for any awards.

Horse of the Year

Without Starship Jubilee, the HORSE OF THE YEAR title likely comes down to two media darlings in a racing season that grappled for stars.

MIGHTY HEART (Dramedy) won the country’s most famous race, the Queen’s Plate, in near-track record time and followed that win up with a similarly impressive score in the Prince of Wales Stakes. His journey to the final leg of the Triple Crown gave Canadian horse racing its most coverage of the year. He is a shoe-in to be named Champion 3-Year-Old Colt in Canada with three wins plus a fourth in the Grade 3 Ontario Derby for earnings of over $696,000 (US).

PINK LLOYD (Old Forester),  the 2017 Horse of the Year and a certainty to be named Champion Male Sprinter for an unprecedented 4th straight year, went four for 5 in 2020 with 2 grade stakes wins all sprinting on the Tapeta, He was third in his finale, the Grade Kennedy Road with earnings of over $268,000.

And COUNT AGAIN (Awesome Again) is making a late season statement. He just won the Grade 2 Seabiscuit Stakes at Del Mar and at Woodbine won the Grade 3 Spingspiel while racing on turf.

There were other accomplished runners in 2020 who will gain some consideration for Horse of the Year (three horses end up as finalists) so here are some thoughts on each category noting some (not all) contenders for awards.

*Note: It is possible that a Canadian horse could make another start in 2020 in the month of December south of the border).

The lone Grade 1 race for juvenile fillies was the Natalma Stakes on turf. The race, a Win and You’re In event for the Breeders Cup, was won by LADY SPEIGHTSPEARE (Speightstown) who defeated Catch a Glimpse stakes winner Alda in the 1 mile race. She ended her season 2 for 2 (80 and 75 Beyer Figures) for Charles Fipke and Roger Attfield.

SOUPER SENSATIONAL (Curlin) was 2 for 2 in 2020 and won the Glorious Song Stakes at 7 furlongs for Live Oak Plantation and Mark Casse. She had an 87 and 76 Beyer in her wins.

DREAMING OF DREW won the top race for Canadian-bred fillies, the Princess Elizabeth, was second in the Catch a Glimpse and fourth in the Natalma for Hoolie Racing Stable and trainer Barbara Minshall. IL MALOCCHIO (Souper Speedy) won the Victorian Queen Stakes and was second in the Princess Elizabeth.  In the west, REA MEA (Lent) was 2 for 2 and won the restricted Sadie Diamond Futurity

The Grade 1 Summer Stakes (a WAYI race) was won by GRETZKY THE GREAT (Nyquist) in handy fashion. He also won the Soaring Free Stakes and landed 6th in the Grade 1 Breeders’ Cup Juvenile. He won 3 of 5 for Gary Barber and Eclipse Thoroughbreds, trainer Mark Casse.

As mentioned, MIGHTY HEART won two-thirds of the Triple Crown with fast clockings. His stablemate BELICHICK (Lemon Drop Kid) defeated him in the 1 1/2 mile Breeders’ Stakes on Turf and was second in the Grade 3 Ontario Derby. The Grade 3 Canadian Derby was won by REAL GRACE (Mineshaft) who also won the Manitoba Derby Trial Stakes. SHIRL’S SPEIGHT (Speightstown) won the Grade 3 Marine Stakes.

Also a main track award, this contentious category includes gals such as SOUPER ESCAPE (Medaglia D’Oro) who won the Grade 3 Trillium at a route distance, the Grade 3 Seaway at a sprint distance and was 2nd in the Sweet Briar Too Stakes and 3rd in the Belle Mahone Stakes for Live Oak Plantation and trainer Michael Trombetta.  PAINTING figures more in the Female Sprinter category but was 2nd in the Trillium and won the Grade 3 Ontario Fashion and was second in the Seaway and Whimsical Stakes.  Last year’s Sovereign Award winning older mare HERE’S HANNAH won 3 of 4 this year, one stakes, the Delta Colleen. The Grade 3 Maple Leaf Stakes was won by HEAVENLY CURLIN (Curlin) and that was her only stakes start in 2020,.

PINK LLOYD ruled this category again with SILENT POET, a turf ace, also on the list of contenders.

PAINTING (Distorted Humor) won the Grade 2 Ontario Fashion and was 2nd in two other graded sprint stakes, third in another sprint stake. SOUPER ESCAPE won the Grade 3 Seaway Stakes and was second in the Sweet Briar Too Stakes in her sprint record in 2020.

Three-year-old ARTIE’S PRINCESS (We Miss Artie) won the important Grade 3 Bessarabian over some older gals and also won the Ruling Angel Stakes against her own age group.