Trainer on the Fast Track to Success on the West Coast

In just her second full season of training, Christine Ammann finished as runner-up in the year-end win standings at the 2020 Hastings meet. Horse racing in the blood: Christine (centre row, third from left) with husband Carl and her owner/trainer grandfather, Robert Hall.

Much like a Thoroughbred with a fine pedigree, Christine Ammann comes from a family of some of Canada’s most successful horsepeople.

Her grandfather, Robert Hall, owned and trained the great George Royal, her parents, trainers Jim and Sandra Loseth, are well known in British Columbia racing circles as accomplished horsepeople, her uncle, Chris Loseth, is a champion jockey and another uncle, Phil Hall, is currently among the leading trainers in the country.

It hasn’t taken long for the married mother of two to make her own tracks to horse racing success, finishing second in the year-end standings by wins at the 2020 Hastings meeting in Vancouver. In just her second year of training for Ron and Rae Fawcett’s Tod Mountain Thoroughbreds, Ammann won 16 races during the COVID-19 shortened 25-day season, just four wins behind Glenn Todd and Mark Cloutier who tied atop the leaderboard.

Ammann had a 32 per cent win rate and ended her season with two stakes wins on the last day of racing, Oct. 1, with the Fawcett’s Stay Fantastic and with her own homebred two-year-old filly Rea Mea.

“I was privileged in the sense that they were all young horses, maidens,” said Ammann who owns a small farm in Aldergrove with husband Carl. “Almost every horse had their conditions so that made it a little easier.”

Ammann credits a lot of her hands-on track experience to almost a decade of working for top trainer Dino Condelinios who conditions the horses for Horatio Kemeny and Mark Mache’s powerful Swift Thoroughbreds. After getting married in 2010, she raced her first horse the following year, O’George, which she owned with her grandfather. O’George was her first winner and in fact, the BC-bred son of Stephanotis won three straight races that year.

Ammann was away from the training business for several year until 2017 when she returned, racing a couple for herself and her husband. Training as a full-time profession was still not on her radar.

“I always loved the horses and knew I wanted to work with them,” said Ammann, “but becoming a trainer kind of fell in my lap.”

That fateful occurrence came just before the 2019 racing season when Terry Clyde, longtime trainer for the Fawcetts, decided to retire and recommended Ammann for the job.

Equipped with some 15 Tod Mountain horses and a couple of her own., Ammann and her assistant/best friend Alison Dube sent 72 starters to the races in 2019, winning just two.

“At first I was thinking ‘oh god, why am I doing this?’,” laughed Ammann. “I wouldn’t say a lot of things went right but I have been in the business long enough I know there are ups and downs.”

Like all horsepeople at the beginning of a new season, Ammann was eager to get rolling in 2020 but the COVID-19 pandemic shut racing, and for a spell training, down at Hastings. The uncertainty of whether there would be a racing season at all was palpable.

“Ron sent me an email saying that he just wanted to give me all his horses,” said Ammann. “I told him he couldn’t do that, he had to hang in.”

Once the season finally got underway in July with a schedule that was half of the usual number of racing dates and much smaller purses, the Ammann stable came out blazing. On the fifth day of the season she sent out three winners including Stay Fantastic, a son of Stay Thirsty who would go on to finish the year 5-for-5 including the S. W. Randall Plate.

“I had him last year as a three-year-old and I always liked him,” said Ammann. “Things didn’t really come together for him but this year I was able to start him off a bit lower in class and he won off the bat and kept going.”

The hattrick was a great day for Ammann and Dube, but nothing would top the last card of the season when they won the Randall Plate and the $100,000 Sadie Diamond Futurity.

“That was an amazing day,” said Ammann. “I still can’t believe it.” 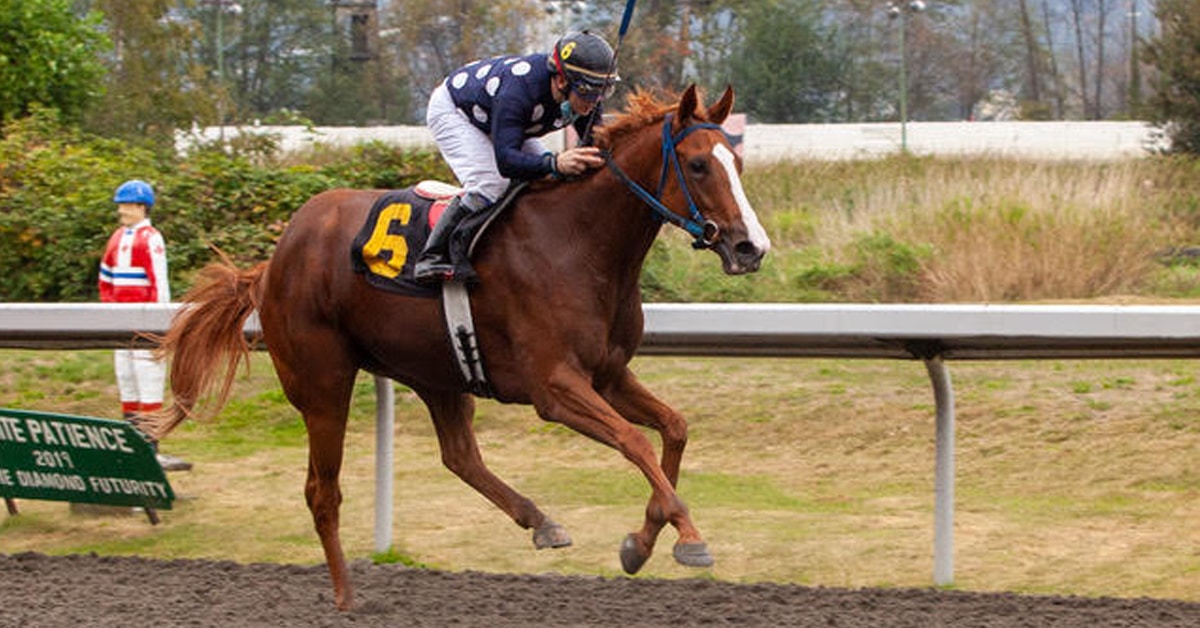 In fact, Ammann trainees finished first and third in the prestigious Sadie Diamond. Rea Mea, a daughter of Lent from Ammann’s mare Strangelove, by Tiznow, had won her career debut at 17-to-1 in July but did not have any opportunities to race until that last day of racing.

“I had entered her in Alberta but I was told by Hastings she could go but I could not, that was their COVID rules,” said Ammann. “So she just stayed in the barn all those months.”

Rea Mea drew off to win the Sadie Diamond by two lengths at 20-to-1 while the Fawcetts’ Kandy Katie landed third.

While the 16-win season did not yield a lot in purse earnings for Ammann or the Fawcetts, there is hope that Hastings can return to its regular 51-day racing schedule for 2021.

“I am keeping my options open,” said Ammann about plans for racing next year. “We did very well this year but we didn’t make much money. Hastings has always had good purses so hopefully we can return to the way racing was [before the pandemic].”

No matter where Ammann races her horses, it is a good bet that you will see her in the winner’s circle on a regular basis.