Saffiano, an Ontario bred Thoroughbred, caught the eye of exercise rider Katie Larsen, who later helped him find a new home and career with Meagan White.
By: Jennifer Morrison Joe Guerrieri (Joey Gee), the new owner of the former Gardiner Farms, cracked the top 10 in the Woodbine Thoroughbred owner rankings in 2018.
By: Jennifer Morrison Veteran thoroughbred breeder Larry Falloon is on the move again with new Manitoba stallion Nonios and an improved band of broodmares. He just can’t quit.
By: George Williams Faces at the Races: Hannah Twomey

Apprentice jockey Hannah Twomey, of Red Lake, Ontario, says she has a lot of people to thank for getting her career started at Woodbine Racetrack.
By: Hayley Morrison After nearly 50 years in the game, Hall of Famer Bill Graham is letting his horses speak for his acumen as a breeder at Windhaven Farms.
By: Jennifer Morrison Mike made a big splash at the Thoroughbred Makeover Competition all while raising money for the LongRun Thoroughbred Retirement Society.
By: Jennifer Morrison 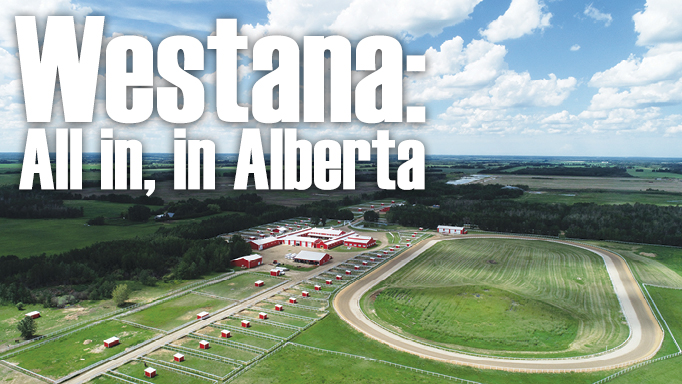 Westana: All in, in Alberta

Bob and Pam Cramers have developed Westana Equine Training and Rehab Centre into a world-class facility for thoroughbred racehorses and other breeds.
By: Dave Briggs Empire Meadows Thoroughbred Park has been reborn under the name Empire Equestrian, now owned and operated by Martin and Lori Neyka.
By: Lindsay Ward Two young Saskatchewan women are off to the Thoroughbred Makeover Competition at the Kentucky Horse Park with their retired racehorses.
By: Jennifer Morrison
Page 8 of 32« First‹ Previous456789101112Next ›Last »