Juddmonte Farms' Mandaloun is the 8-to-5 favourite for the premier race at Fair Grounds on a stakes-packed card of racing. 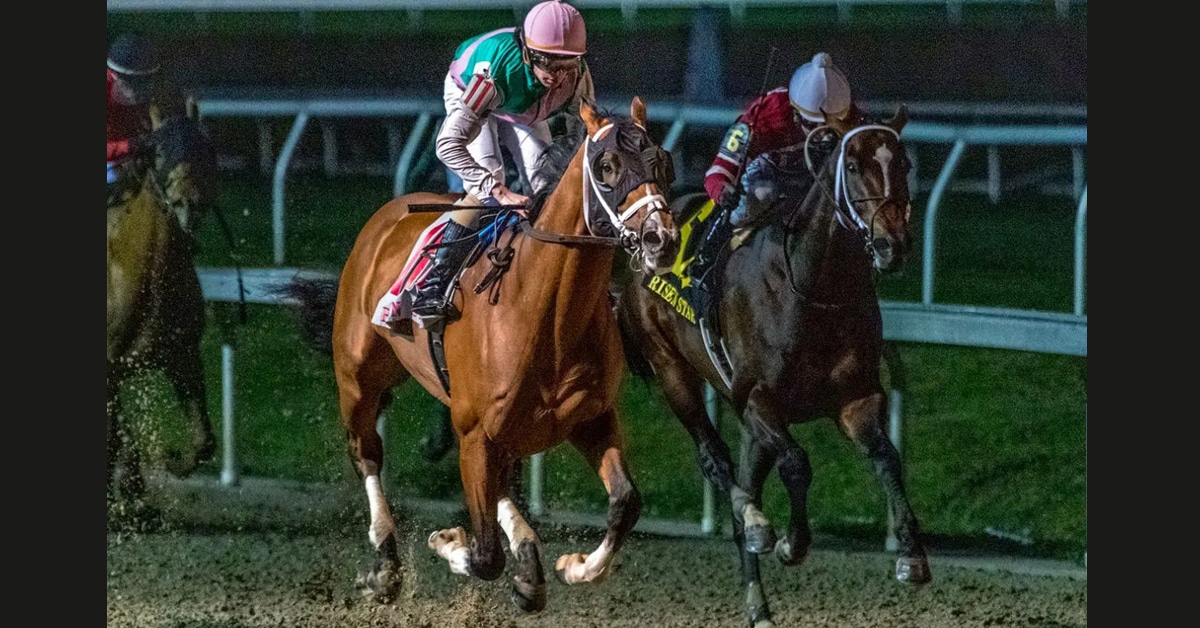 Mandaloun, by the world's top sire Into Mischief, continues his march to the Kentucky Derby (G1) in the Louisiana Derby Saturday - Fair Grounds/Hodges photo

Mention Juddmonte Farms’ homebred Mandaloun to trainer Brad Cox and the reaction is telling. And immediate. Cox is looking forward to showing the rest of the racing world what he’s thought all along—that Mandaloun is one serious 3-year-old—when he starts as a strong favorite in a sterling renewal of Saturday’s 108th running of the $1 million TwinSpires.com Louisiana Derby (G2) at Fair Grounds Race Course & Slots.

Run at 1 3/16 miles, the Louisiana Derby will offer 170 qualifying points for the Kentucky Derby Presented by Woodford Reserve, on a 100-40-20-10 scale, and highlights a robust 14-race card that offers eight stakes overall, including the supporting feature, the $400,000 TwinSpires.com Fair Grounds Oaks (G2) for 3-year-old fillies. The Derby is the last race on the card and anchors an All Stakes Late Pick Five (races 10-14) and All Stakes Late Pick Four (races 11-14) with pools that are both estimated at $750,000.

Mandaloun (post 6, as Mike Diliberto’s 8-5 morning line favorite, with Florent Geroux to ride), a son of Into Mischief, burst on the national scene as a 2-year-old, easily winning both starts sprinting in Kentucky at short odds. Things didn’t go as swimmingly in his 3-year-old debut, however, as he was third at odds-on in the local Lecomte (G3) in January, finishing behind winter rivals Midnight Bourbon and Proxy. Mandaloun was also making his two-turn and stakes debut in the Lecomte, and after taking a step back to look at the big picture, Cox wasn’t as disappointed as maybe the betting public and Mandaloun’s fan club was.

“You have to keep in mind it was his first start around two turns and first start in a stakes and he was a little bit wide the entire way,” Cox said. “I think he got a lot out of the race and moved forward off it. From a physical standpoint he looks like he’s continued to develop.”

Cox also decided to make what would be a key equipment change after the Lecomte, as he put blinkers on for the local February 13 Risen Star (G2). Mandaloun trained brilliantly in the mornings with blinkers and backed Cox’s high praise in the afternoon, when a much more polished colt turned the tables on both Proxy and Midnight Bourbon with an authoritative 1 ¼-length win, while earning the 50 Kentucky Derby qualifying points that went with it. To Cox, the win and marked improvement was due to a combination of things.

“More than anything, it was just the experience of having the race going two turns under his belt,” Cox said afterwards. “I think the blinkers did help out. Florent immediately made a comment after the race. Much more focused in the post parade, more focused on his job. We didn’t put a bunch of cup on him, just like a one-inch cup, but it seems to have done the trick to get him mentally over the top, mentally getting him where he needs to be.”

With the Risen Star behind him, and a berth in the Run of the Roses already assured, Mandaloun heads to the Louisiana Derby in a bit of an interesting position. Cox, who won the race last year with Wells Bayou, doesn’t want to squeeze the lemon dry Saturday, even though there are a million reasons to do so. Mandaloun has continued to flourish in his training, highlighted by a March 6 bullet 59 1/5 drill going 5 furlongs over the track, which gives his trainer that much more confidence that he can pull off an elusive double that hasn’t accomplished since Grindstone did it in 1996.

“His last two works have been phenomenal; we’ve done as much with him in the morning than we can do,” Cox said. “The goal is to get the job done on Saturday. He’s going to have six weeks to recover, if he runs the way we hope he should, to point to the Kentucky Derby. There will be a period there where he can recover then hopefully, we can start cranking him up towards the end of April for the first Saturday in May.”

Godolphin’s homebred Proxy (post 4 at 7-2 with John Velazquez) was a game second in the Risen Star and will try to emulate Mandaloun’s path to victory, as he’ll add blinkers for the meet’s signature race. The son of Tapit has been a meet-long work in progress for trainer Mike Stidham, who has continually said the best is yet to come for a colt still on the improve. Proxy, who is 2-for-5 lifetime, broke his maiden and won an optional-claimer earlier in the meet before running second in the Lecomte, but after losing focus and dropping back entering the far turn of the Risen Star, only to re-break and salvage second, Stidham felt the time was right for a change.

“There were just a number of reasons why the blinkers were added,” Stidham said. “If you look at all of his races here at the Fair Grounds, in every race you can kind of see him doing a little erratic stuff, whether it be shying away, drifting out, or losing focus like he did in the Risen Star. You can’t win Kentucky Derbies or Louisiana Derbies by doing that.”

Proxy has since worked three times with blinkers, which includes a February 26 bullet 47-flat local 4-furlong move. Stidham is confident the equipment change will have an impact, as will the elongated distance of the Louisiana Derby

“I felt like the works with blinkers, in company, he was definitely a little handier for the rider and more focused,” Stidham said. “We’re finally getting these horses at our game; without a doubt the 1 3/16 miles is a big help. I’m welcoming the added distance and I’m hoping things go well here and then we get even more distance in Kentucky.”

Olliemyboy, owned by JMJ Stables, is 2 for 2 for trainer Norm Casse since he moved south to race on dirt and he tried the Grade 2 New Orleans Handicap. The late running son of  Union Rags was bred by James and Janeane Everatt and Arika Everatt Meusse and he is 12 to 1 with Irad Ortiz on board.